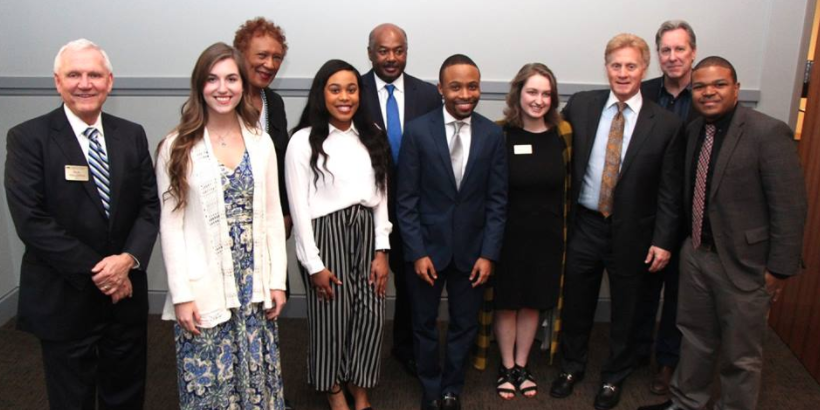 It was a great day to be a broadcaster in Georgia on January 25th! We had one of our most successful Winter Institutes in recent memory at the University of Georgia with the Grady College of Journalism and Mass Communication.

We began the day with Breakfast with Counsel. The FCC’s Gary Schonman gave updates on election year issues. In addition to Gary, Derek Bauer from Baker Hostetler from spoke about his role crucial in the U.S. Gymnastics case. We were also joined by Communication Law professor from the University of Georgia, Dr. William Lee. David O’Connor of Wilkinson, Barker, Knauer also gave his insight about election year issues. After the breakfast, Schonman held a breakout session with broadcasters specifically to discuss the administration of political records and files. Our Hall of Fame Luncheon and Scholarship was a huge success. We induced Mary Jones from WJBF, Art Sutton from Georgia-Carolina Radiocasting, Greg Davis from Davis Broadcasting and Tim McVay from WSB-TV into our 2018 Hall of Fame.

In addition to the Hall of Fame, the Georgia Association of Broadcasters awarded five students with $1,500 scholarships. The scholarship recipients are: Sommer Stockton from Brenau, Donovan Harris from UGA, Stanley Miller from UGA.. Cheyenne Brown from UGA and Charlotte Norsworthy from UGA. This brings the total to $75,000.00 since its inception in 2006. At 5:00 P.M. Caroline Beasley, the CEO of Beasley Broadcasting arrived for a “meet and greet” with the ladies of DiGamma Kappa. DiGamma Kappa is the official broadcasting society of the University of Georgia. Following the meet and greet, we hosted our annual Spring Banquet Dinner with DiGamma Kappa. Four more awards were given out: Stanley Miller won the WSB Radio Award. Maddie Ray won the TV Innovator Award and Jennifer McEntire won the Radio Innovator Award. Caroline Beasley was presented with the DiGamma Kappa Distinguished Achievement Award in Broadcasting and Cable “For Exceptional Service.” After accepting the award, Beasley and Associate Board Member, Richard Warner sat down for a fireside chat where Caroline enriched the students with words of wisdom and encouragement.