The GAB Connects with State Representatives During Recess Period 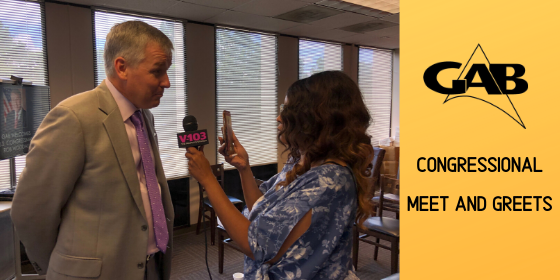 On Monday July 22, 2019, the Georgia Association of Broadcasters hosted Congressman Rob Woodall (R-GA 7th District) in their Brookhaven office to discuss the state of broadcasting in Georgia and look ahead to upcoming legislature that could affect the industry.

“The Georgia Association of Broadcasters, they represent all of the broadcasters in the metro region and across the state.” said Woodall. “When it comes time to pass legislation that affects the broadcasting community, I don’t have to go and reinvent the wheel myself. I can find local experts who have been doing this for 20, 30, 40 years to help me sort through the tough questions and get some good answers.”

Among those in attendance were a dozen representatives from Atlanta broadcasting companies, including all four major news networks.

A number of topics were discussed including the renewal of the Satellite Television Extension and Localism Act (STELA) and the Local Radio Freedom Act.

“He was beyond candid and very open with us, which was very helpful,” said Bob Houghton, President of the GAB. “It’s a great opportunity for broadcasters to get together and visit with him, but also for us to be together with that so there’s kind of a dual purpose.”

Congress is about to enter their summer recess period which will end September 6th. In that time the politicians will not be in session, but that doesn’t mean their work will end. The GAB has plans to meet with several more representatives before they all reconvene.

In addition to discussing legislature, Houghton also emphasized the importance of these politicians understanding the role that local broadcasters play in their communities when dealing with things like emergencies.

The education of these sessions is not one sided though. It’s just as important for local broadcasters get the opportunity to learn about national happenings that could affect their industry as it is for them to relay local issues to the congressman.

The GAB is scheduled to meet with the following: