You are here:
EventsHeadlineNewsWorld News

On Thursday, March 26, Georgia Governor Brian Kemp and members of the COVID-19 Task Force participated in a live Town Hall broadcast that reached all 159 counties in Georgia. The live event was broadcast on 33 television stations and more than 150 radio stations. In addition to the traditional broadcast, the event was streamed live on over 200 stations. The broadcast was a great bipartisan success with Atlanta Mayor Keisha Lance Bottoms participating with Georgia Governor Brian Kemp presenting Georgia’s response to the COVID-19 crisis.

GAB member stations and audiences took to social media using the #GeorgiaUnites and #askgovkemp to help spread the word and to ask questions for Governor Kemp to answer. 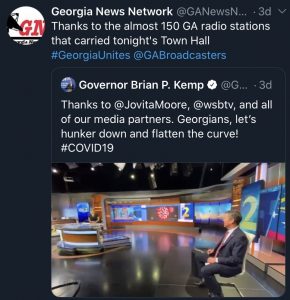 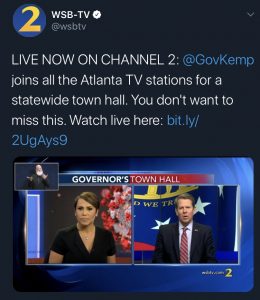 Governor Kemp’s Press Secretary, Cody Hall says, “It was the best of what public officials and media can do together to inform our citizenry.”

The Georgia Association of Broadcasters is extremely proud of the tremendous example that was set by media competitors coming together for the benefit of Georgians. Instead of competing against one another, each station joined forces to bring Georgians the most up -to- date and accurate information to as many people as possible. This collaboration is also a great example of how essential and trusted the local broadcast industry really is. In times of crisis, broadcasters spring into action to serve their communities.

In case you missed it, please click HERE to view the entire broadcast. In addition to Governor Kemp and Mayor Bottoms, Georgians heard from Task Force Chairman and Commissioner of the Department of Public Health, Kathleen Toomey; Georgia Emergency Management and Homeland Security Director, Homer Bryson, and Insurance Commissioner, John King while on Deployment as a General in the Army National Guard. General King also addressed Georgia’s Spanish speaking population on both television and radio stations participating in the statewide broadcast. 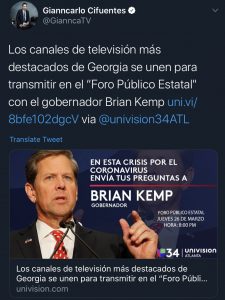 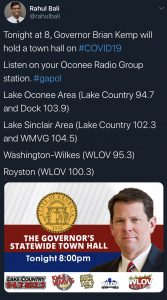 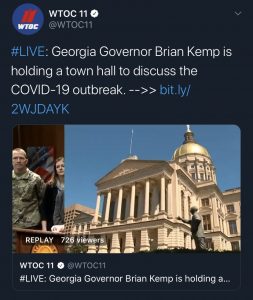 For questions regarding how the Georgia Association of Broadcasters can assist your station and audience, please visit our COVID-19 Resources Page HERE.

Or you can ask us a question HERE.