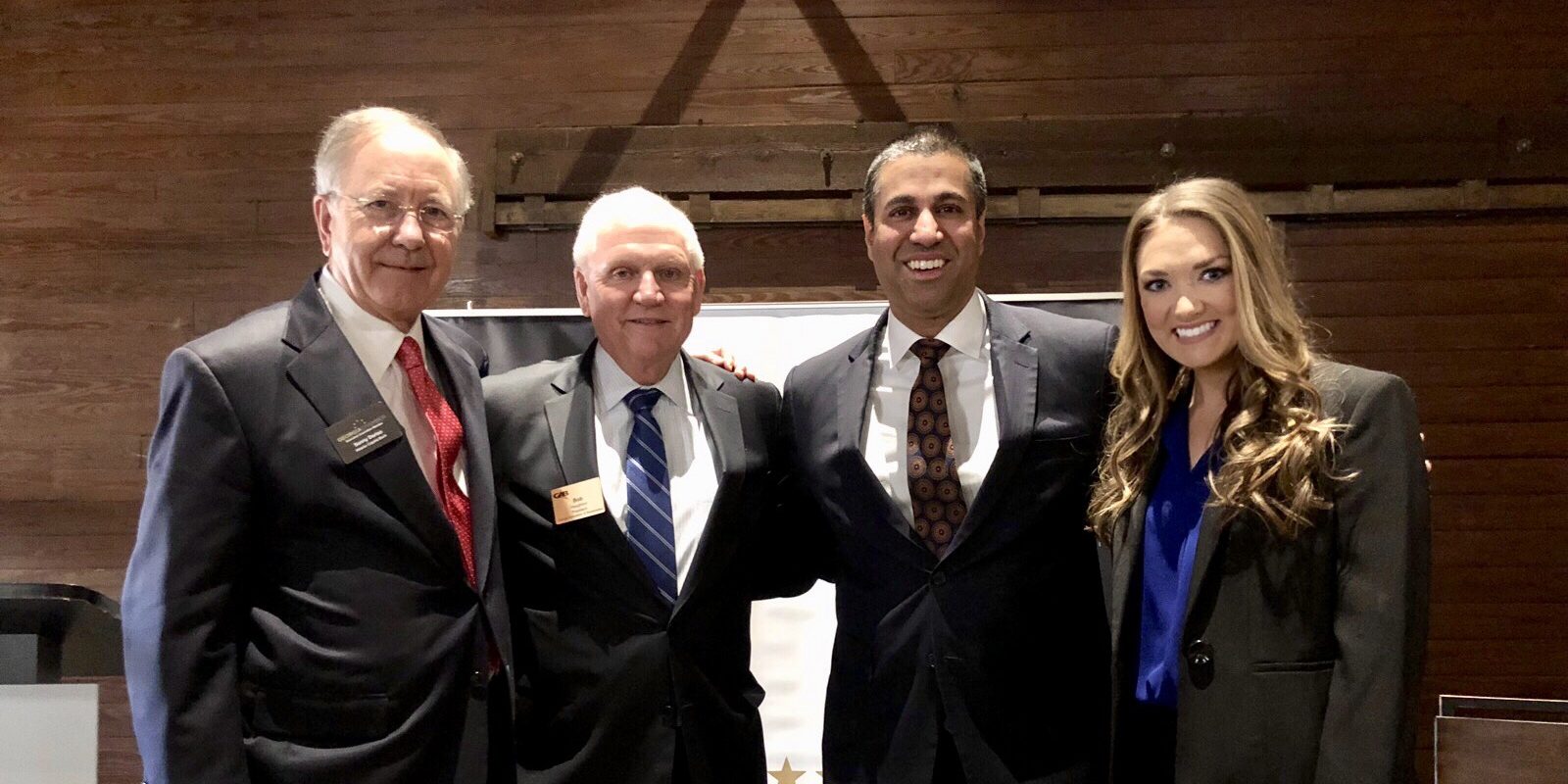 On March 19, 2019 the Georgia Chamber hosted a breakfast with Federal Communications Commission Chairman, Ajit Pai and NBA legend, Dominique Wilkins to discuss 5G technology. Before the breakfast, Chairman Pai sat down with GAB President, Bob Houghton and Director of Digital Media and Communications, McKenzie Lewis for an interview.

Bob: “Today it is our privilege to welcome FCC Chairman, Ajit Pai to Georgia. Ajit Pai was appointed to the position of FCC Commissioner by President Obama in 2012 and named Chairman of the FCC by President Trump in 2017. Chairman Pai is a believer in less regulation, more technology, is a great friend and supporter of broadcasters. Prior to speaking to the Georgia Chamber of Commerce, Chairman Pai is meeting with the GAB.”

McKenzie: “Thanks Bob. And thank you Chairman Pai for joining us here today. We’re so honored to have you. So the Georgia Association of Broadcasters is actually celebrating our 85th anniversary this year. We are the first and oldest state association in the entire United States and that’s something we’re really proud of. And we’re really proud to have you be a part of that today.”

Chairman Pai: “Well congratulations on the anniversary. Actually we’re 85 years old as well. So I think the two of us go well together and I think it speaks to the great partnership we’ve had with broadcasters over the years. And so thanks for all the work that you do. I know especially when emergencies strike like with the tornadoes that recently went through Alabama, broadcasters in the Columbus, Georgia market really stood up and that’s in your DNA. And that’s one of the things that we cherish is that broadcasters are always there in a pinch, always there to inform you, always there to help you be safe, and always helping to bring the community together. So congratulations on the anniversary and here’s to 85 more years of success.”

McKenzie: “We share a birthday! This past month the tragedy in Alabama and Columbus and it’s so sad but it’s something like that is really where broadcasters shine and do their best work in that role of first informers.”

Chairman Pai: “It’s really incredible, I’ve seen that across the country, not just here in Georgia but in the wake of Hurricanes Harvey, Irma, and Maria, I had a chance to see in Texas, Florida, and Puerto Rico that broadcasters were the ones when all of these other communications networks were going down, they were the ones literally keeping the lights on, keeping people safe. That’s the kind of work I really cherish, even when times are good, you’re the ones covering high school football games on Friday, you’re covering Sunday church services, you’re the ones there helping to food drives and all these other things that really make us bind together as a community. So I’m really grateful, not just as a regulator but as a viewer and a listener. It makes a big difference.”

McKenzie: “Thank you. We appreciate that and we’re very proud of how our member stations handled that situation. Something we’ve been remindin those member stations of recently is the upcoming Radio License Renewal. So for Georgia that deadline is December 1st.”

Chairman Pai: “So that December 1st deadline definitely comes up quicker than you would think. I always tell my kids, you know to do it today and you won’t have to do it tomorrow. The same thing applies to the FCC’s rules and regulations too. Especially things like migrating some of that information to online public files. I know that there’s a lot that broadcasters, especially small market broadcasters have on their plate. But this is a really important requirement and this is one of the things that we have to scrutinize. So I would definitely encourage broadcasters to get ahead of the game, take care of that as soon as you can and then move on to doing what you do best which is covering the local news and inform your people.’

Chairman Pai: “I think it will have some impact and hopefully that online migration goes smoothly. we can have a transition that no one will ever notice. The FCC won’t take notice of it, the broadcasters will just make it part of the routine and later years we’ll kind of laugh that there was ever a big transition period.”

McKenzie: “So the purpose of your meeting here today is to talk about 5G technology.”

Chairman Pai: “Yeah so this is the next generation of wireless technology and we’re really bullish about what the positives are for wireless consumers. As the world goes wireless, we want to make sure that we’re ahead of the game. You know talking about auctioning off spectrum, getting the infratructure out there, allowing people especially in rural areas to take advantage of this digital revolution. We don’t know exactly what the 5G intenet economy is going to look like, but we know that it’s going to be big. And we want that innovation and investment in the United States.”

McKenzie: “How do you see this 5G technology influening the broadcast industry.”

Chairman Pai: “I think it’s going to be tremendous. For example with the introduction of AT&T 3.0, I frankly see that as almost like a 5G type application. An internet protocol based delivery of broadcast information. It’s a way to get that pipe into every single smartphone that’s out there. So I think it actually gives broadcasters a great chance to compete in this digital landscape. More and more consumers seem to be thinking about delivery mechanisms. When I was a kid, television meant a big box that meant you had to be there at 8 o’clock on Sunday to watch ‘The Love Boat.’ But now these devices are with us all the time and that means broadcasters have to think about reaching them in whatever way the consumer finds friendly.”

McKenzie: “Yes, defintley. We’re excited to hear a little bit more about that later this morning in the event with the Georgia Chamber. One more question we wanted to bring up is the repack. So for those of you who may be watching this who don’t know what all repack entails, Bob is going to bring you up to speed a little bit.”

Bob: “In 2016, wireless carries bid nearly $2o billion dollars, resulting in over 1,000 broadcasters having to repack or relocate spectrum position. Congress declared there would be no harm to broadcasters and they established a $1.7 billion dollar fund to help make the transition. Last year and this year, an additional billion dollars was added for the move and no more time was asked for. But this winter, we’ve had severe winter that has severely impacted phase two, which is supposed to end next month. My question is, what happens if that slows down the process and it’s going to take more than 39 months. Wireless carries want what they paid for and broadcasters want to harm. Is there enough time to finish this? If not, then what?”

Chairman Pai: “We certiantly hope so. With phase one we were actually ahead of the game. We were planning to repack about 90 stations and we’ve repacked about 133 in advance. We’re very optimistic with phase one. With phase two you might see some more difficulties. But I’ve consistently said to Congress and the broadcasters and to the American public, if we get the sense that any phase is out of whack, we want to take note of it. And now because Congress has given us addidional resources, they added to that $1.75 billion an additional billion and also extended protection for TV translators, FM radio stations and others, we’re hopeful that we can make sure that that core promise of the incentive option which is that broadcasters that stay in the business will be made whole. They don’t want to have to pay out of pocket for any relocation that’s out of their control. We want to make sure that we fufill that promise. We’re continuning to minor that situation and we have a great incentive action taskforce back in Washington that’s constantly giving me updates on this. If Georgia braodcasters, if any broadcasters across the country see anything that we should take note of, let us know. It’s much better to be proactive and flag something for us because you are the eyes and ears on the ground. We can’t know about where there might be a shortage of work crews or that the antennas just cant be installed because of weather or whatever, we need to know that kind of information.”

McKenzie: “One last question we have for you is we know you’re a pretty big basketball fan. I know your Jayhwaks are only a 4 seed right now but any predicitions for the tournament?”

Chairman Pai: “So this is one of the years where I usually sour on Kansas City because we always tend to go out early but this year in particular I’m very very nervous. I mean the team has been up and down especially in the region we’re in. I was just mentioning to a friend that if we get through North Carolina, somehow, it’s going to be Kentucky in the 4th. So it’s going to be really tough but I think all of America, you know there’s so many things that divide us right now… I would hope that the one thing that can unite us is for the top seed Duke to go down at some point. It’s the right thing to do so whoever can make that happen in the tournament, please make that happen.”

McKenzie: “Bring together America by brining down the giant. Bob, what are your predictions?”

Bob: “Well Chairman, I’m a Big 10 guy so I’m expecting Michigan State to do what you asked for and bring down Duke. I expect to see Michigan return to the Final Four, along with Michigan State two Big 10 teams, and then two ACC teams, but not Duke Virginia and North Carolina. So those are my picks but you didn’t that if Kansas does get through the first round, they’re in a home court advantage in Kansas City.”

Chairman Pai: “That is nice. I will say the selection committee sometimes does do us a little favor there so it bears some fruit, we’ll see. North Carolina is fun to watch and if we get that far and they do, it’s going to be a heck of a game.”

Bob: “Well you had a full day in Georgia yesterday and a full day today. We very much the time you’ve given broadcasters in the state of Georgia so we thank you very much. We hope to maybe get you back for one of our events.”

Chairman Pai: “I would love to come back! Especially later on in the spring or it would be great to be back in the Peach State.”