GAB Day at the Capitol 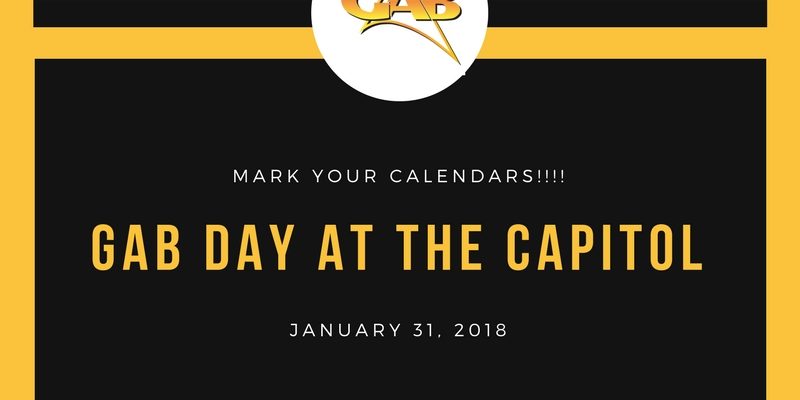 The Georgia Association of Broadcasters will hold the second annual, GAB Day at the Capitol on Wednesday, January 31st starting at 8 a.m.

Building off our successful event in 2017, the GAB has arranged an even bigger and better event for this year.

The day begins with a light breakfast at 8:00 AM with speakers from 8:30 to 11:00.  Room location- Capitol 123. We strongly urge you to take this opportunity to meet with your local representatives and senators after our program. Below you will find a compete schedule as well as a list of speakers.

Parking and Directions Day at the Capitol

8:00 AM Breakfast and Coffee

Presentation of Proclamation of GAB Day at the Capitol

Proclamations will be read in respective chambers at TBD Time.

Harris Blackwood was appointed director of the Governor’s Office of Highway Safety by Gov. Nathan Deal on January 10, 2011. He also serves as chairman of the Georgia Driver’s Education Commission. His previous experience in state government includes management positions with the Georgia Department of Corrections and the Stone Mountain Memorial Association.

Blackwood has a great deal of experience in public relations and communications. His work in the media has earned him numerous honors, including being named three times as Georgia’s top columnist by the Georgia Press Association.

Blackwood was re-elected to serve a second term as GHSA Vice Chair in August 2016. He has also served as the Chair of the Association’s Strategic Communications Committee.

Sen. Henson currently serves as the Minority Leader for the Senate Democratic Caucus and is the Vice Chairman of the Urban Affairs Committee. He also serves on the Administrative Affairs, Government Oversight, Health and Human Services, Natural Resources and the Environment, Reapportionment and Redistricting, Regulated Industries and Utilities, and Rules committees. Senator Henson is chair of the DeKalb County Senate Delegation. He has the distinction of being the past chair of the DeKalb Democratic Party. 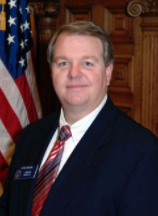 Senator Butch Miller was elected to the Georgia State Senate in 2010 to represent the 49th Senate District, which is comprised of the majority of Hall County.

In addition to his duties as Senate President Pro Tempore, Sen. Miller serves as chairman of the Administrative Affairs Committee and as a member of the Senate Appropriations, Assignments, Banking and Financial Institutions, Ethics, MARTOC, Regulated Industries and Utilities and Rules Committees. He is also a member of the joint Metropolitan Atlanta Rapid Transit Overview Committee (MARTOC) and the Chairman of Georgia World Congress Center Authority Oversight Committee.

Representative Bob Trammell, a Democrat from Luthersville, was sworn in to the General Assembly on January 12, 2015. Rep. Trammell serves as the House Minority Leader while holding membership on several committees, including Ethics, Governmental Affairs, Information and Audits, Judiciary Non-Civil, Motor Vehicles, and Ways & means.

Trammell practices law at the Trammell Firm, which he founded in Luthersville, Georgia in 2003. Bob started his legal career as a law clerk in the United States District Court for the Northern District of Georgia. He subsequently practiced law at King and Spalding before returning home to start his own firm. Since 2011, Bob has served as the county attorney for Meriwether County. He is also a member of the Meriwether County Chamber of Commerce and the Meriwether County Bar Association.

Carr serves on Georgia’s Judicial Nominating Commission, the body charged with reviewing and recommending judicial appointments. He was appointed to the Commission in 2011 by Governor Deal. To date, the Commission has filled more than 100 judicial vacancies statewide. He is also on the Board of Advisors for the Atlanta Lawyers Chapter of the Federalist Society for Law and Public Policy Studies, the Human Trafficking Committee for the National Association of Attorneys General and the Executive Committee for the Georgia Older Adults Cabinet. Carr previously served as Commissioner of the Georgia Department of Economic Development (GDEcD) under Governor Deal from November 2013 to November 2016. 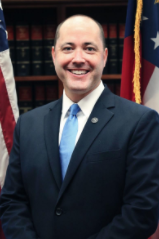 State Senator Brandon Beach, a Republican, was elected to the Senate in 2013. He represents District 21 which includes portions of Cherokee and Fulton counties.

Senator Beach is the Chairman of the Transportation Committee. He is also a member of the Economic Development, Higher Education and Science and Technology committees.

Senator Beach currently serves as the President and CEO of the Greater North Fulton Chamber of Commerce, leading the fourth largest chamber in the metro area. Sen. Beach has played an integral role in helping North Fulton grow and prosper in his 24 plus years in Atlanta. During his tenure with the Chamber of Commerce, membership of top level executives and CEO’s (Chairman’s Circle) increased by 60 percent, and commerce retention developed from 67 to 82 percent annually.

Senator Beach served as the Chairman of the Public Private Partnership Committee (P3 Committee). Under his leadership the P3 Committee was able to acquire key local transportation projects approved for Cherokee and North Fulton. Sen. Beach was elected to the Board of the GDOT by state legislators from the 6th Congressional District in 2008.

Christian Coomer represents Bartow and Floyd Counties in the Georgia House of Representatives. Rep. Coomer was first elected to the House in 2010. He was unanimously elected by his Republican colleagues as the House Majority Caucus Whip in 2016.

Prior to serving as Majority Whip, Rep. Coomer was the chairman of the House Transportation Committee. In that role, he led the House’s oversight of the nearly $4 billion annual budget of the Georgia Department of Transportation. Rep. Coomer also served as Senior Floor Leader to Governor Nathan Deal, shepherding the Governor’s legislation through the House. Rep. Coomer is a member of the following standing committees; Appropriations, Banks and Banking, Ethics, Judiciary Non-civil, Juvenile Justice, Retirement, Rules, and Transportation. In addition, he has been appointed to the Public Defender Council Legislative Oversight Committee, the Fiscal Affairs Oversight Joint Subcommittee, the Juvenile Justice State Advisory Group, and the Joint Transit Study Committee.

Representative Beverly, a Democrat, from Macon was elected to the Georgia House of Representatives in July of 2011 and has served as the representative for the 143rd District of Georgia ever since. Rep. Beverly serves as the House Minority Caucus Chairman while also being a member of several committees including Appropriations, Ethics, Health & Human Services, Retirement, Rules, Small Business Development, and Special Rules.

Dr. James Beverly is an optometrist with two medical practices: Midtown Vision Center and Goggles Eye-care 4 Kids. Beverly graduated from Guilford College with a degree in Biology. He then went on to the Pennsylvania College of Optometry. He has since gone back to school to get an MBA from Wesleyan College and an MPA from Harvard University.

Senator David Shafer, a Republican, was first elected to the Georgia Senate in 2002. He represents Senate District 48, which includes portions of Fulton and Gwinnett counties.

Senator Shafer has an active history in the community. He has served terms as vice chairman of the Gwinnett County Library System Board of Trustees and as a member on the former Gwinnett  Forsyth Regional Library System Board of Trustees. He has also served on the Board of Directors for the Gwinnett Chamber of Commerce, the United Cerebral Palsy of Greater Atlanta and the Partnership Against Domestic Violence (formerly Georgia Council on Battered Women).

Senator Josh McKoon, a Republican from Columbus, was first elected to the state Senate in 2010 for the 2011 – 2012 legislative term.

Senator McKoon earned a Bachelor of Arts degree from Furman University in 2001 and a Juris Doctorate from the University of Alabama School of Law in 2003. Senator McKoon currently works as an attorney for Crowley/McKoon. 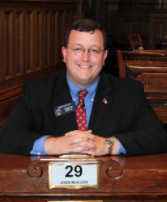