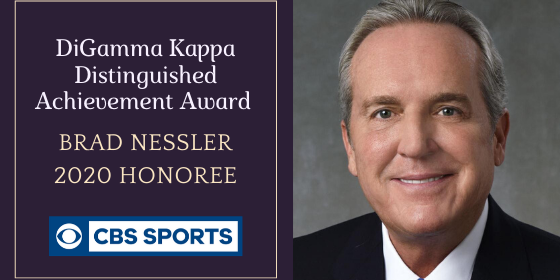 The Georgia Association of Broadcasters is pleased to partner again with DiGamma Kappa Broadcast Society from the Grady College of Journalism and Mass Communication. The two organizations will present Brad Nessler with the “Distinguished Achievement Award in Broadcasting and Cable For Exceptional Service” Award on January 29th.

Nessler previously worked for CBS Sports from 1990-92 on college football, NFL, as well as men’s and women’s basketball, including the NCAA Division I Women’s Championship game. He also was the Network’s host for speed skating coverage at the 1992 Olympic Winter Games in Albertville, France.

Before returning to CBS Sports, Nessler had an illustrious 24-year career at ESPN. From 1992-97, he called college basketball games and Big Ten football. Beginning in 1997, Nessler served as an analyst for ABC for various sports and events including college basketball, the Bowl Championship Series title game and most prominently with college football. From 2002-04, he served as an announcer for ESPN and ABC’s coverage of the National Basketball Association. After ESPN began its coverage of Monday Night Football in 2006, Nessler served as a contributor calling various games between 2006-11. He most recently called the ESPN College Football Primetime game on Saturday nights and the College Football Playoff semifinals.

In addition to his various ESPN assignments, Nessler also served as play-by-play announcer for the NFL’s Thursday Night Football package on NFL Network from 2011-13.

For tickets and more information about this event, click HERE.