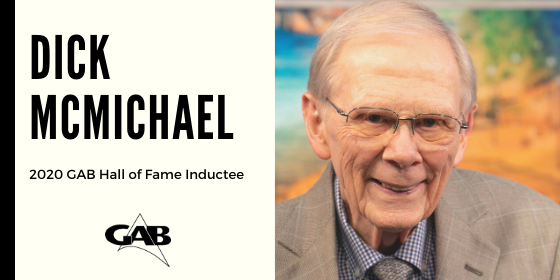 Atlanta, GA– Dick McMichaels will be inducted into the Georgia Association of Broadcaster’s Hall of Fame on January 29th, 2020.

Dick McMichael’s 50-year broadcasting career started in 1948 at WDAK in Columbus, Georgia and ended when he retired at WTVM in 2000. Learning that Dick, his 17-year-old drum major, was interested in radio announcing, his high school band director connected him with an announcer at WDAK who mentored him. After graduating high school, he went to work there.

His next stop was at WLAG LaGrange. After about a year there, he enrolled at Mercer University in Macon and worked the night shift announcing job at WBML. A hospitalization brought him back to Columbus, where he joined WRBL Radio.  While there, he was drafted into the Army. After that, he returned to WRBL as a TV booth announcer, got married and landed a job at WSB Radio in Atlanta . Among famous people he interviewed there was David Sarnoff, a founder and Chairman of the Board of RCA and NBC Radio.and TV. He also did feature reports for NBC Radio. One included interviews with former First Lady Eleanor Roosevelt and Doctor Jonas Salk, developer of the Salk polio vaccine.

In 1962 he returned to WRBL as program manager for WRBL Radio.   Subbing one night for the regular TV news anchor, he was asked to keep doing it. Among stories he covered was Ft. Benning’s involvement in the Vietnam War and John Wayne’s shooting of the movie “Green Berets.”

In 1968 he returned to Atlanta as a weekday reporter and weekend news anchor for WAGA-TV. There he covered the state Capitol beat and aftermath of the assassination of Dr. Martin Luther King, Jr..

In 1973, he returned to Columbus as News Director for WRBL radio and TV, and anchor of the evening TV news.  Also, he produced a number of award winning documentaries and hosted a weekly half-hour public affairs talk show.

In 1986, he switched to WTVM to co-anchor the 6 and 11 p.m. week-night newscasts.  At WTVM, of the many documentaries he produced, one featured a one-hour interview with former Secretary of  State Dean Rusk. He worked there from 1986 to 2000. After retiring, he did a few more special reports and documentaries for WTVM.

Among his awards is GAB’s 2004 Georgia Broadcaster of the Year award.  His  civic service included memberships in the Columbus Jaycees, Columbus Lions Club, and the Rotary Club of Columbus.  He’s also a published author with one article appearing in the Readers Digest, and he wrote and published The Newsman: a Memoir.

A widower, he has a son, four stepsons, two grandsons, a step-grandson, two step-granddaughters, and two great-grandsons.

More information and tickets for this event can be found HERE.