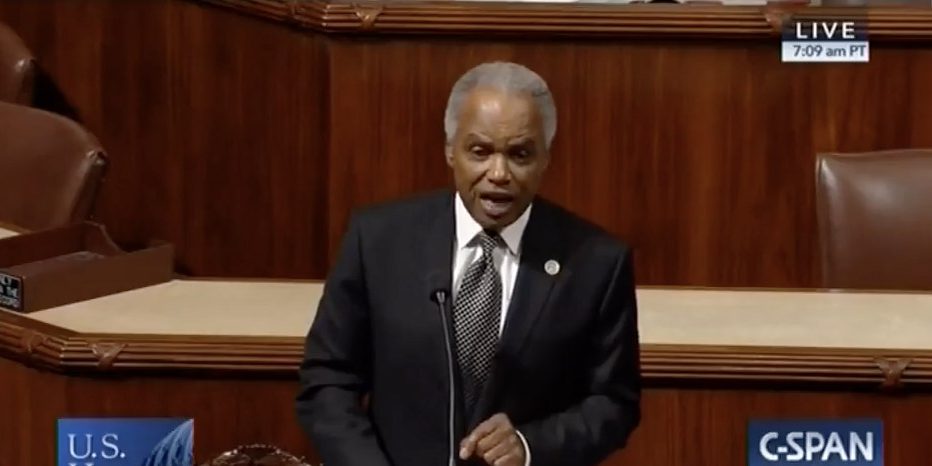 ATLANTA, GA–  On Wednesday, December 6th, Congressman David Scott paid tribute to WSB-TV’s Tim McVay from the U.S. House of Representatives floor. McVay announced his retirement in October after serving 39 years in the broadcasting industry. He was most recently vice president and general manager of WSB.

McVay spent his entire career with Cox Media, starting at WHIO in Dayton, Ohio as an account executive. McVay also served on the Georgia Association of Broadcasters Board of Directors as well as the ABC Television Affiliate Association Board of Governors.

Here is the full text of Congressman Scott’s press release:

WASHINGTON, D.C.—Today Congressman David Scott (GA-13) took the House Floor to pay tribute to Channel 2 WSB-TV’s Tim McVay, Vice President and General Manager, on his retirement after 39 years in broadcasting. His remarks are enclosed below.

“Thank you very much, Mr. Speaker. I rise this morning to pay honor to an extraordinary, great American. Mr. Tim McVay, Vice President and General Manager of WSB Television is retiring after thirty-nine years as a top executive with Cox Media Group Television Stations across this nation, from Dayton, Ohio, to Pittsburgh, Pennsylvania, to San Francisco, California, and to Atlanta, Georgia – earning Tim McVay the highest award in Television, including the Edmund R. Murrow Awards, the Peabody Awards, the Emmy Awards, the Alfred E. DuPont awards, and the induction into the prestigious Silver Circle of the National Academy of Television Arts and Sciences.

“Tim McVay is a great American, deeply rooted in his love of country and his love of family, including his loving wife Cindy and his sons, Sean and Ryan.  His son Sean, Mr. Speaker, is head coach of the Los Angeles Rams and the youngest head coach in the history of the NFL. And his father, the legendary John McVay, was the Head of Football Operations for the San Francisco 49ers, and, Members of Congress, winning five Super Bowls. What a great All-American story.

“But there’s more, Mr. Speaker and Members of the Congress that I must tell you about Tim McVay. Tim McVay’s life has been like that shining light on the hill: reaching out, helping other people, loving his neighbor as himself, that most sacred of Commandments.

“Whether it’s helping the hundreds of television journalists, young people in their careers who are now leading in the television industry or helping me and hundreds of our employers in Georgia with our annual jobs fair, where we have gotten over 12,000 jobs for Georgians.

“Or whether it’s our health fair, which we have every year and where we give breast cancer exams and prostate exams to those individuals who, for reasons of income, don’t have insurance, saving lives.

“And our veterans, the work that Tim McVay has helped us with our veterans. Ladies and gentlemen, of Congress, let me tell you it was Tim McVay, under his leadership at WSB television in Atlanta, Georgia and his WSB reporter, Aaron Diamant, who exposed to this nation the tragically high suicide rates of our veterans. And then got behind myself and my Republican fellow member of Congress, Larry Bouchard of Indiana, and helped us pass legislation to get more psychiatrists into the V.A.

“God bless Tim McVay and God bless the United States of America, land of the free and home of the brave. Thank you.”