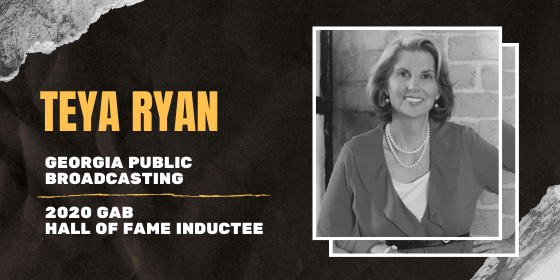 Atlanta, Ga– President and CEO of Georgia Public Broadcasting, Teya Ryan will be inducted into the Georgia Association of Broadcasters Hall of Fame on January 29th.

Teya is a broadcast media veteran whose passion for storytelling, curiosity for the world around her, and innovative ideas have earned her leadership roles at venerable broadcast operations including PBS, CNN, TBS and GPB Media.

With a career that spans over 30 years and includes broadcast management, production and content creation, Ryan brings a wealth of experience to her role as President and CEO of GPB Media. She was appointed in March 2009.

During Ryan’s tenure, GPB has continually been recognized for top quality production. Most recently, during the 2019 ceremony for the Southeast EMMY awards, the station was honored with eight awards. In 2017, the station also marked its third win for Overall Station Excellence. GPB also took home the honor in 2012 and 2015.

Ryan also negotiated a partnership in 2014 to bring GPB radio to the Atlanta market for the first time ever. Already a large radio system across Georgia, with seventeen radio stations, now GPB Radio is available in the state’s largest media market.

Ryan has built up the GPB Education division to become Georgia’s digital content media provider for the classroom, offering free locally produced, Georgia-specific content and digital streaming services across all subject areas to teachers and students.

Ryan has also moved GPB into nontraditional areas for Public Broadcasting, for example, she created a new division of the company, GPB Sports. Since its inception, the sports division has broadcast weekly Friday night high school football games, along with the high school football, basketball, and cheerleading finals for the state.

Ryan is the recipient of multiple awards and accolades, including being honored as one of Atlanta Magazine’s “Women Making a Mark,” as well as to the magazine’s list of “The Atlanta 500,” in 2018 and 2019 as one of the city’s most influential business leaders. Atlanta Business Chronicle also recognized her as one of its Most Admired CEOs. In January of 2019, Ryan was named to Georgia Trend’s list of Notable Georgians. In 2018, she was inducted into the NATAS Southeast Silver Circle.

Ryan is also a member of the Downtown Atlanta Rotary and serves on the board of GEEARS, Georgia Early Education Alliance for Ready Students; Woodruff Arts Center; Georgia Governor’s Digital Task Force, Georgia’s SHAPE Council. She is also the co-chair of the Georgia Literacy Commission and Advisory Committee and a member of the Board of Councilors of the Carter Center.

The GAB’s Hall of Fame luncheon will take place in Athens, Georgia on the campus of the University of Georgia. More information and tickets to this event can be found HERE.