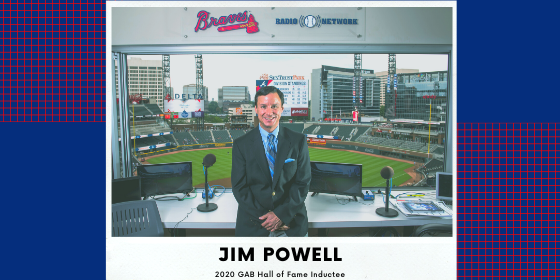 Atlanta, Ga– The Georgia Association of Broadcasters is pleased to induct Jim Powell from the Atlanta Braves Radio Network into the 2020 GAB Hall of Fame.

The 2020 season will mark Jim Powell’s 27th as a Major League broadcaster and his twelfth year in the Atlanta Braves radio booth.

He spent the previous 13 seasons as a member of the Milwaukee Brewers broadcast team, teaming up with Hall of Famer Bob Uecker longer than any other broadcaster in Uecker’s illustrious career.

Powell joined the Brewers in 1996 and was named the 1998 NSMA (National Sports Media Association) Wisconsin Sportscaster of the Year. In addition to his radio duties, he spent time as a member of the Brewers television team during the 1999 and 2000 seasons.

Powell started his broadcasting career with an internship in the newsroom and sports office at WGST-AM while he was in high school. He then worked at WRFC and WUOG in Athens while attending the University of Georgia, followed by positions in Columbia, South Carolina, with WOLO-TV and then WVOC radio. While in Columbia he worked extensively for the University of South Carolina Gamecocks and was an integral contributor to football, basketball, and baseball broadcasts. Powell was named the NSMA South Carolina Sportscaster of the Year in 1990, 1991, and 1995.

In 1991, Powell was hired by WSB-AM to work weekends, where he covered the Braves, Georgia Bulldogs, and Atlanta Falcons for two years. He also worked for CBS Radio, including calling the Sun Bowl, and called numerous college football games on television for Host Communications.

He and his wife Emmy, who have been married for 31 years, are active members of their community, supporting numerous charities such as the Rally Foundation, the Child Abuse Prevention (CAP) Fund, Jungle Kids for Christ, the Dunamis Foundation, Camp Kudzu, UGA Miracle, Make a Miracle, and local youth athletic programs. He spends his winters coaching youth basketball and is also an avid tennis player.

A native of Roswell, Ga., Powell attended the University of Georgia as a National Merit Scholar.  He and Emmy have three daughters, Allie, Sabrina, and Julia.

Jim will be inducted on January 29th at the annual Hall of Fame Luncheon in Athens, Georgia. More information about this event and tickets can be found HERE.